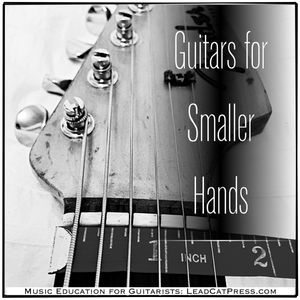 Guitarists with smaller than average hands have a hard time finding guitars that fit them well, but smaller guitars do exist. A proper fitting instrument will help guitarists play their best and it may also help to prevent some injuries.

I'm 5'4" and my hands are proportional, but I've had some injuries that were at least partially impacted by playing guitars that were too big for me. I've been a guitar instructor for over 20 years, and it wasn't until fairly recently that I discovered what it feels like to play a guitar that feels right.

A few brands sell "guitars for women," but their guitars miss the mark and their campaigns feel like inauthentic attempts to capture a newly visible market of musicians (that's been here all along) rather than address an actual need we have in the field.

Just to be super clear: A person's gender doesn't determine if a smaller guitar is right for them, people of all genders benefit by playing guitars that fit their bodies, and some people with large hands also enjoy playing smaller guitars.

While many of these heavily marketed smaller guitars have lighter and/or oddly shaped bodies to better accommodate some humans, it's the neck that needs to be scaled down to make them more playable. The standard width of a guitar neck at the nut is about 42mm, and I prefer somewhere around 37-38mm (1.5" at the nut of the guitar.) But all of these "guitars for women" have the standard 42mm necks, making them feel no different than what I guess they want us to call all the "guitars for men" that already exist.

My first experience playing a guitar that fit me was at Seattle's Guitar Store. I was on a teaching break and I noticed a 3/4 size (student or kid model) Jay Turser electric guitar hanging on the wall, and it looked like it was my size. When I sat down to play it, I immediately noticed how well it fit my body and hands. My arms were relaxed, my hands were not straining to reach the notes; everything I wanted to play was easily accessible, and I was stunned. I bought the guitar for about $125, and then learned that the neck width was 38mm at the nut.

About a year or so later, I walked into The Guitar Store, and one of the guys pulled me aside and told me he had a guitar for me to check out. It was a 1964 Fender Duo Sonic, and it also had a very narrow neck along with a short scale. I fell in love and wouldn't admit it at the moment, but I came back that night and bought the guitar for about $1000.

I had some local shops do some work on both of the guitars because they were both "student model" instruments; the tuners, frets, and electronics needed some adjustments/replacements to make them usable in my studio. At the time, I had a really nice Washburn guitar with really nice hardware, etc. but every time I tried to play it, I reinjured myself, so I ended up selling that guitar (to a wonderful student of mine) and limiting my playing my two smaller guitars.

What I'd really like to get across, is that by being able to play a guitar that actually fit me, my injury which had impacted my life and career for about 12 years, disappeared. I do not believe that playing guitar caused my injury, but I do know that by switching to guitars that fit my body and hands, I was able to play freely again and it has been so wonderful. Here are two Sonny Stitt solo I had wanted to transcribe and play for years, but was only able to do it after playing these smaller guitars.

Another year later, I walked into Thunder Road Guitars in Seattle, and noticed that they had a 1959 Fender Musicmaster. I really liked the single pickup (my arm kept hitting the switch on my Duo Sonic) and the narrow neck width at the nut made it another guitar that I could actually play, so I bought it. I had to have it refretted and the neck finish needed some repairs, but this guitar is as good as a "student model" guitar can get.